IS INVENTORY EVIL? WILL WE SOON BE SWAMPED WITH TOO MUCH STUFF?

I have been asking around the bicycle business, and so far can’t find anyone who knows what the current bicycle inventory-to-sales-ratio (ITSR) is. Or, more specifically, what their ITSR is.

Here is a textbook definition of the ITSR Key Performance Indicator (KPI): the inventory to sales ratio measures the amount of inventory in your store compared to the number of sales you’re fulfilling. The KPI is a broad measure of your store’s inventory management and helps you adjust your stock to maintain high margins.

This is obviously a definition for retail, but it works equally well for businesses of all types and sizes. It uses a broad measure of your inventory management and helps you adjust your inventory to maintain margins, meaning margins of profit.

The National Bicycle Dealers Association (NBDA) is wrapping up the first Cost of Doing Business for Bicycle Retailers study since 2014, so we will have the “typical,” meaning the median, bike shop inventory productivity shortly.

The 2014-2015 NBDA Cost of Doing Business (CODB) study shows the inventory productivity for all reporting bike shops and for high-profit bike shops as follows:

While not ITSR, the CODB study does provide an idea of overall inventory productivity for the “typical” American bike shop pre-pandemic. In my opinion, the gross margin percentage on merchandise sales wasn’t that good, and the inventory turnover frankly sucked, but this is just my opinion.

While not focusing on ITSR, the study does give an idea of overall inventory productivity for specialty bicycle retail, showing 1.8 inventory turnover and for the high-profit shops, which by the way represented the top 25 percent of all reporting bike shops, 1.7 inventory turns, and a 37.14 gross margin on merchandise sales.

This was achieved utilizing a supply chain system that had been in place and functioning efficiently for over 30 years, until the pandemic driven disruptions that started during the first quarter of 2020.

One of the most important aspects of the bicycle business changed profoundly by the pandemic has been the just-in-time (JIT) principle of inventory management that was introduced to the American brands and buyers by Shimano and the Taiwanese bicycle and component manufacturers over 30 years ago.

It was the Americans who introduced JIT to Japan during the reconstruction from the world war when manufacturing started with a blank slate. In broad strokes, Toyota taught Shimano, Shimano taught Giant Manufacturing Company, Giant taught the rest of the Taiwanese bicycle manufacturing establishment, and that in turn took JIT to mainland China with them.

The JIT methodology and system worked so well that for the better part of 30 years the American buyers provided their original equipment manufacturers in Asia with forecasts, followed by firm purchase orders and letters of credit. Shipping containers, loaded with bicycles, arrived at U.S. brand warehouses 40 to 45 days after a firm order was placed. There were disruptions from time to time, but they were infrequent, and the overall supply chain returned to normal in relatively short order.

This supply chain lead-time became not only the standard operating procedure, but an accepted rule until the pandemic, and the multiple supply chain disruptions that erupted by mid-2020 and have continued in full force and effect, with new variations through year-to-date 2022.

On and after mid-2020, the lead time for finished goods bicycles from Asia to the U.S. shot up from 100 to 120 days or more, depending on the component lead times, manufacturing plants being open, available containers, container ship sailings, and trucking throughout the supply chain. Transparency and visibility dropped, and it became difficult to track shipments and get reliable information on status and location along the supply chain.

JIT was pushed aside and replaced with Just-In-Case (JIC) inventory management throughout the supply chain that encouraged hoarding and overstocking to meet customer demand. This in turn has resulted in some bloated inventories and even longer lead times throughout the channels of trade that have been tolerated and accepted, as long as consumer demand stayed intense enough to drive all the supply chains.

What is often overlooked amongst the plethora of disruptions is the simple fact that in March 2020, when COVID-19 shut everything down and a pandemic was declared, consumers who were isolated switched from spending money on services, like eating out, going to movies and entertainment venues, to buying goods, merchandise, and other “stuff” in large quantities online.

Chart A shows this graphically, and the bicycle business got caught up in this increase in consumer demand, including for service and repair.

Sales and demand for bicycles shot through the roof, and the bicycle business got caught up in thinking we were in the midst of a second “Bike Boom” as every supply chain in the business struggled to provide product and service. 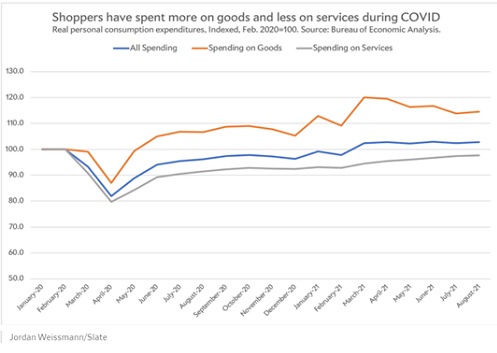 Enter the Bullwhip Effect. Here is what Robert Armstrong wrote in a Financial Times Opinion piece, Friday, May 27, 2022, titled: The bullwhip effect, redux.

“Inventories crack that whip. Way back in December I wrote about the bullwhip effect. It works like this: in response to a drop in supply or pop in demand, companies in a supply chain over-order or hoard inventory to protect themselves.

“The over-ordering amplifies as it moves up the chain from retailer to wholesaler to manufacturer to supplier. The whip cracks when suddenly demand weakens and there is too much inventory in the chain, leading to a glut. I wrote: The question is whether bullwhip effects might go into reverse next year (2022), leading to oversupply at just the same time as rabid end demand for goods is cooling anyway because (please, please) Covid is subsiding.”

Is the bullwhip effect in reverse? On May 28 Washington Post article titled Consumers are shifting their spending from goods to services, David J. Lynch wrote: “Now consumers are returning to their previous habits with the balance between goods and services spending back to where it stood in May 2020, according to data adjusted for inflation from Flexport, a freight forwarder. A separate metric cited by Goldman Sachs shows goods consumption about 5 percent higher from before the pandemic, down from a peak gap of 15 percent.”

“We are just in the early stages of seeing the rotation of consumer spending from goods to services. As time goes on, you are going to see more of that. Food services are quite strong. Travel is picking up, airfares and hotel occupancy,” said Kathy Bostjancic, chief U.S. economist at Oxford Economics. “The consumer is looking more to services spending, especially with spring and summer upon us.”

Walmart and Target, the number one and number two largest retailers of bicycles in the U.S., were both caught off guard in recent weeks as consumer preferences abruptly shifted, leaving both with what has been described in the media as a mountain of products like appliances and televisions that both have been forced to discount. Disclosure in both retailers’ quarterly investment calls led to their stock dropping to levels last seen in the 1980’s. Are bicycles part of either or both mass merchant’s inventory problem? I don’t know for sure, but they both clearly have ITSR issues.

When Bill Austin first came to the Schwinn Bicycle Company in the late 1970’s after the first (and only) Bicycle Boom, and was new to the bicycle business, he told those of us in sales and marketing that: “inventory is evil!”

He continued to advocate this throughout his career in the business. I know he believed in the JIT system of inventory management, and wonder how he would have adapted and adjusted to the shift in consumer demand in March 2020, and the resulting bicycle business migration from JIT to JIC inventory management.

Damned if you do and damned if you don’t! Consumers not only demanded more new and used bicycles, but service and repair for those they already owned. They also changed and shifted the way they shopped, purchased, interacted and communicated with retailers and brands.

Brands and retailers followed as best they could, including turning their backs on the JIT system out of what was broadly seen and accepted as a necessity to ensure there was enough product available to meet the demands of consumers.

Too much inventory, safety stock and actual hoarding were condoned and accepted up and down the bicycle supply chains as one of the costs of keeping up with consumer demand, the increase in riders and ridership, and the immediate gross revenue.

In saying this, I am not judging, but feel obliged to point out that the JIC logic and inventory system is only as good as consumer demand, and will become “evil” when consumers don’t want it or as much of it.

Unlike Robert Armstrong, the Financial Times Op Ed columnist, HPS and this writer have opined on the probability of consumer demand for bicycles ebbing in the current year, and warned about the potential of an inventory “problem” based on both past history, and the current consumer research conducted by Sports Marketing Surveys for the NBDA, before the Russian invasion of the Ukraine.

This takes me back to my question. What is your Inventory-To-Sales-Ratio for bicycles, and what is your inventory, merchandising and sales plan for the rest of this year?

Please, contact me if you have questions or would like more information about anything in this article. jay@humanpoweredsolutions.com

DO WE HAVE TOO MUCH OF WHAT AMERICAN CONSUMERS DON'T WANT?